Notice that my goal wasn't to make her look 20 or "facelifted".  I just brought back some of her natural beauty to the way I remember her a few years earlier.  After all that, it still absolutely looks like Grandma to me!  Wish I could still looked as young as I did there…without Photoshop! ☺

I've seen Bill Clinton on TV recently and he's not looking as tired out as photo #1 made him look!

On the home page, I purposely took a lot of years off my grandmother to show what I could do.
Often the results need to be far more subtle.
Here's a picture I found on the internet of the lovely Candace Bergen.
My goal on this one was to subtly make it a more flattering shot, but in such a way that no one would have
reason to think it was an old picture.  (Again, Candace is not a client...I'm just a fan.)

Andy's Goal:  "Can you make me look any hotter in this picture?"

My response:  In more ways than one!  Besides the obvious background change and a couple of smaller touch-ups, the main improvement in this one was getting his left eye open more and adding that hint of reflection.
Lot of work, but what a difference!  It almost looks like a different picture, but if you look at the lighting in his hair and the shadows on his neck, you can see that it IS the same shot.

Mason liked this shot of himself but his Mom wanted him with his pre-college look:

Another one where I tried to be subtle.  Just making a sweet shot that wasn't optimal a nicer shot.
Improved the lighting, reduced the glare on his face and his glasses, and cut back a bit on red tones.

Susan realized too late that the "professional looking" background she'd chosen just looked drab.
I also pointed out to her that her normally-nice smile looked a bit crooked in her selected shot.

Rather than redo her whole shoot, I reworked the colors in the background, give her two choices of "new" outfits, and warmed up that smile for her.  It's subtle, but if you mouse over the gray version, you'll see it!

Kevin needed just a headshot.  He liked this family shot of him, but wanted his relatives cut out and his company logo removed.  I recommended we also get rid of the picture frame behind him and paint the wall a color that would make his eyes pop.  After that, we evened out his skin a bit and put him in a nicer color shirt that would look
less like an undershirt.  And I removed a mole he'd had actually removed since the picture was taken.

Jennifer loved this three generation shot with her mother Carol and daughter Katie, but there was a glare on them all, a bit of food on Katie's face, a car we didn't need, and some rather dead grass.  Without changing their real looks at all, I just made it a nicer picture.

I needed two headshots:  one more casual and one in a suit.  I don't even own a suit anymore.
I did have a shot of myself in a suit, but it was from like 1999.

I found a recent snapshot of myself, did a little Photoshop magic on the first two pictures
and created the casual business card and the updated suited headshot.

The Gang Who Can't Smile At The Same Time

I love this final one! Putting together the best of two shots (and getting rid of sunglasses on heads) 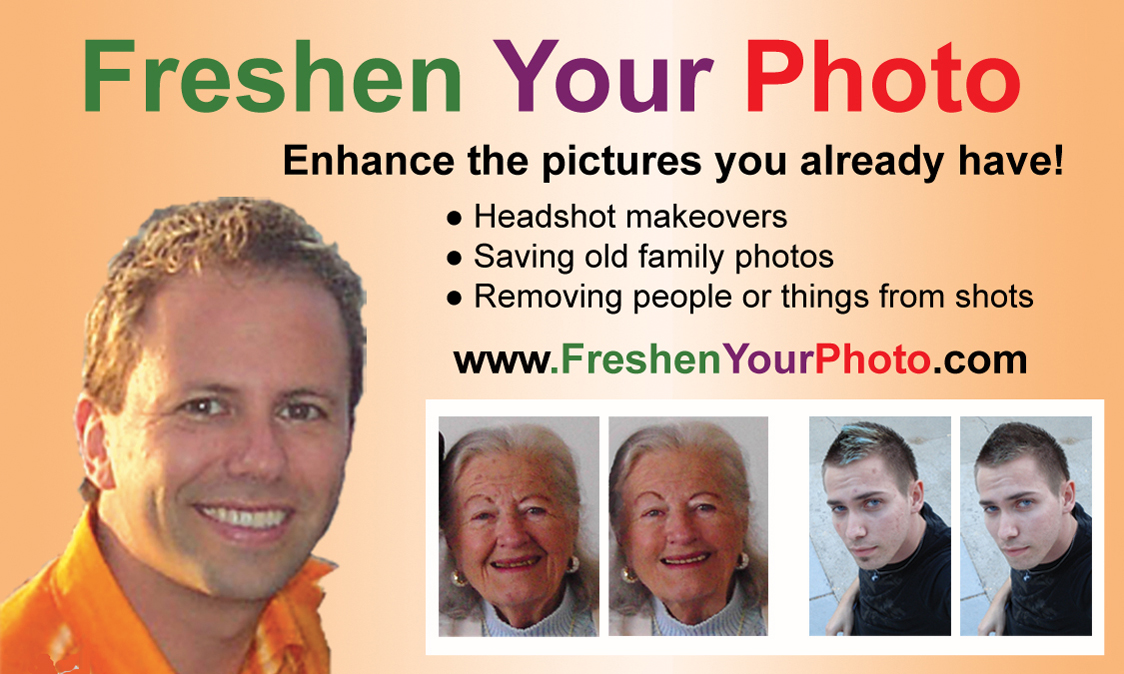 And yes, we can create and order business cards for you like the one above!